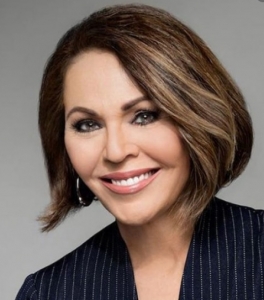 Maria Elena Salinas is a very well-known Hispanic journalist. She has been the co-anchor for many years at Noticiero Univision, a household name for Hispanic families in the United States. Her reach extends outside the U.S. working in 18 Latin American countries. She has interviewed heads of state, rebel leaders, dictators, and every president since Jimmy Carter. Her work as a journalist is undeniably impressive.

Salinas started out working as a reporter for KMEX-TV, a Univision affiliate in Los Angeles. She has since been among the first female journalists in wartime Baghdad. She has also volunteered for the National Association of Latino Elected and Appointed Officials. This association encourages immigrants to vote and participate in politics as a whole.

Being a first-generation American, Salinas understands the hardships of many Americans and immigrants. She was given the title of “Voice of Hispanic America” by the New York Times. She has won many other awards including two honorary doctorate degrees, the Mickey Leland Humanitarian Award, Peabody Award, and an Emmy, becoming the first Latina to receive an Emmy in 2012.

Salinas is very passionate about the Latino community and empowering those members through every type of work she does. She is a lovely spirited woman who has paved her way in the journalism field. Salinas, nosotras te honramos!