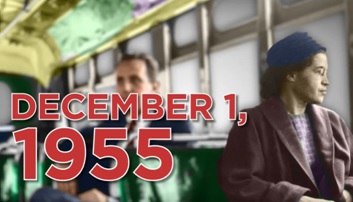 Rosa Parks is known of course, for her arrest in 1955 for not giving up her seat on a Montgomery bus in the Jim Crow south, and she deserves that recognition since it resulted in the Supreme Court ruling that segregation was unconstitutional two years later, but her story is much more interesting than just that.

While she was an advocate for African American rights dating back to her role as chapter secretary for the NAACP, she hadn’t intended to be the “test case” being sought to end segregation.  In fact, 4 other women had been arrested on buses before Rosa, but her impeccable reputation led E.D. Nixon to convince her she would be the ideal plaintiff to challenge the terrible laws that forced blacks in the south to drink from only certain fountains, have designated back of the bus seats, only check out books from “black” libraries, and more rediculous laws.  The fact is, Rosa didn’t even sit in the white section of the bus – she was actually in the black section when the white section filled up and she was told by the driver to move along with 3 others to create a new “white” row.  She was the only one to refuse, not because she was “tired of body but tired of giving in.”