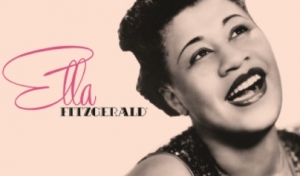 To end Women’s History Month,  we celebrate “The First Lady of Song”, Ella Fitzgerald. One of the most popular female jazz singers, she won 13 Grammy Awards and sold over 40 million albums. Her voice is ageless and continues to be heard throughout the years. Her ballads and jazz has been accompanied by the greats like Duke Ellington and Frank Sinatra.

Fitzgerald was born in Virginia but grew up in New York. She moved back home to Virginia with her sister after her mother, Temperance died from injuries inflicted from a car accident. Ella went to reformatory school due to her run-ins with the police and low grades. At 15, she was broke, alone, and it was the Great Depression. She entered a drawing at the Apollo, a local theater, so she could compete in Amateur night. She thought of dancing that night, but after the Edwards Sisters, she changed her mind and sang “Judy”. That night would launch her career and the rest is a beautiful history.

Ella would record “A-Tisket, A-Tasket” selling a million copies in 1938 and was in the pop charts for 17 weeks. She fell in love with Ray Brown, a bassist, and adopted a son. Ray introduced her to manager and producer Norman Granz who elevated Ella as a musician. Norman cared very deeply about civil rights and equal treatment of all his musicians. This would be crucial for Ella and others in the band to have someone standing up for them wherever they went. Even Marilyn Monroe would advocate for Ella making the owner of Mocambo, a popular nightclub, have her booked. Her health was negatively impacted due to her work. Her diabetes worsened at the end of her career leaving her amputated below the knees. She will always be remembered for her heavenly musical notes and incredible lyrics that we still feel right down in our soul.