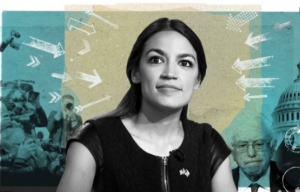 Alexandria Ocasio-Cortez, or AOC as she has been nicknamed, has made history in Congress. She beat the fourth most powerful Democrat in the House, Joe Crowley to become the youngest woman to ever be elected to Congress at just 29 years old. Her campaign was centered around the idea “Women like me aren’t supposed to run for office” leading her to challenge and end Crowley’s 14-year reign. A remarkable feat for such a young woman who is guiding the way for a new generation of political talent.

AOC is of Puerto Rican descent but grew up in the Bronx. She worked with Senator Ted Kennedy focusing on immigration issues during her college years. She worked with Bernie Sanders in 2016 trying to abolish ICE, reform criminal justice, offer tuition-free college and universal health care system.

AOC also supports the switch to renewable energy sources introducing the Green New Deal with Massachusetts Senator Ed Markey in 2019. She has never shied away from voicing her opinions and standing firm with what she believes in. This was exemplified when she tweeted out her sentiments about Alabama outlawing abortion as a horrifying law. AOC has also drawn attention to herself due to calling out Mark Zuckerberg over Facebook’s policy of permitting political ads with misleading information. This gained a lot of attention and led to an investigation of how information affected the election or if there was any tampering.

She won reelection on November 3, 2020, and continues to be part of “The Squad”.  Often called out by her male congressmen even when she isn’t involved directly in a dispute, she remains true to her ideals.  We happen to love women who stand up for what they believe in