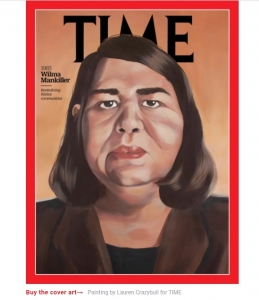 to advocate for the land of her ancestors and the preservation of her customs. Wilma’s life has always revolved around being with family and she was taught from an early age the importance of this.

Being one of eleven children, she grew up in a poor family. The family left Oklahoma to head to California for better opportunities. In California, she learned about Native American efforts and became part of San Francisco’s Indian Center. For a while, Wilma wasn’t focused on her activism but on building her new family which had troubling times. When a group of Native American students captured Alcatraz prison, this lit up something in Wilma again. She had forgotten how much she cared for these causes. She divorced her husband and moved with her daughters back to Oklahoma.

In Oklahoma, two events would shape her life and change her forever. She was in a car accident where her best friend tragically died. Later after her recovery, she was diagnosed with myasthenia gravis, a chronic neuromuscular disease. This would make life very difficult for Wilma who often spoke in large gatherings and had to write down her speeches. Wilma did not let this bring her down, but she felt a new sense of purpose in life. She helped Bell, a small village on the Cherokee reservation, obtain a water system and repair all the houses. Her efforts resulted in her being made the deputy principal chief of the Cherokee Nation in 1983 due to her unparalleled strength and passion for her people.

She faced threats for being a woman running for these high positions but never let it stop her. She focused on education, jobs, and healthcare for the Cherokee people. She fought until the day she died from pancreatic cancer in 2010. Her legacy lives on affecting those around her to this day. We honor har as part of Women’s History Month.