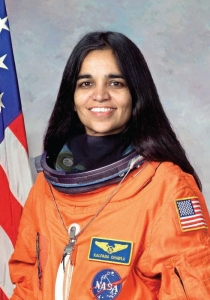 Today, we honor Kalpana Chawla for her heroic actions. She was the first woman of Indian origin to go to space.

She was an American astronaut and engineer. Her first mission was as a specialist and primary robotic arm operator on the Space Shuttle Columbia in 1997. Tragically, in 2003, the Space Shuttle Columbia disintegrated when reentering Earth’s atmosphere after 27 completed mission, killing seven crew members including Chawla. She was awarded the Congressional Space Medal of Honor and is regarded as a national hero in India. Her work for the aerospace industry and the science community continues to be remembered with streets, universities, and institutions being named after her.

Chawla was born in Haryana, India. From a very young age, she was fascinated by airplanes and flying. She would go with her father to local flying clubs and watch planes for hours together. She moved to the U.S. after receiving her Bachelor of Engineering degree in Aeronautical Engineering. She would obtain her masters at the University of Texas at Arlington and earn a second masters and Ph.D. at the University of Colorado Boulder. Chawla was a very accredited scientist who was offered a position at NASA Astronaut Corps in 1991. She completed much significant research in NASA and served as a role model for young girls who want to go into similar fields. She continues to be a beacon of light in space.